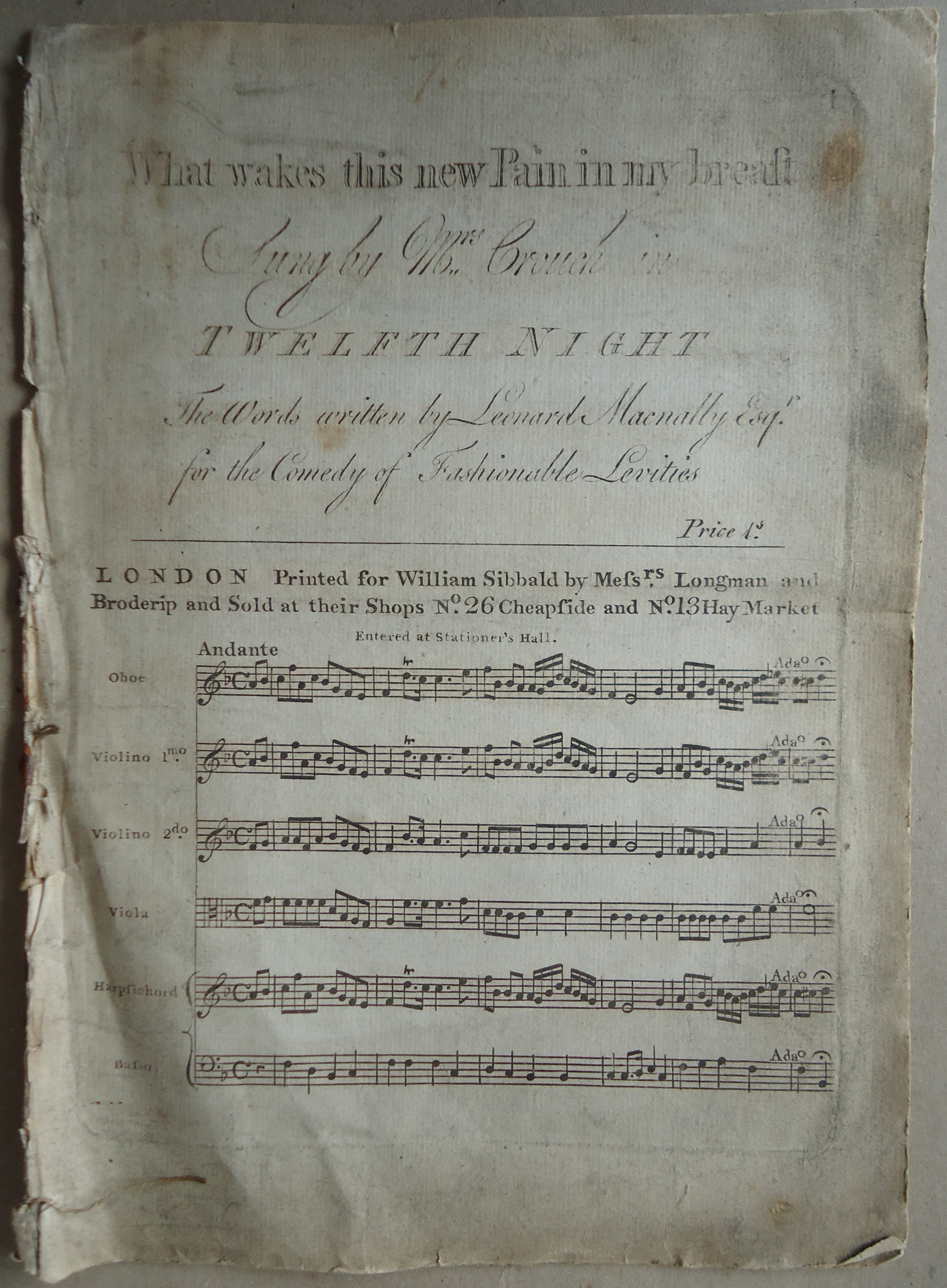 I found this old score (published c.1790) in one of the second-hand bookshops on Charing Cross Road, London, in a box of miscellaneous items. It is foxed and the folded edge looks tatty with bits of string hanging off it – it must have been torn out of a volume sometime in the last couple of hundred years or so. There are eight large pages – six pages of full score plus a single-page version for guitar. The paper has white horizontal lines visible through it when held up to the light. I can’t see any watermark. The ink is brown. It is old enough to have been printed with f meaning s in a number of places throughout.
At the top centre of the first page of the score is a very faint handwritten number 75. Could this have been copy number 75? If so, out of how many?
The piece is scored for a small ensemble: voice, oboe, two violin parts, viola, and harpsichord / bass.

‘What Wakes This New Pain In My Breast’ 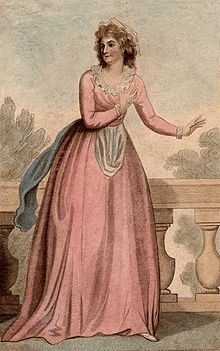 The Words written by Leonard Macnally Esq.
for the Comedy of Fashionable Levities

What wakes this new Pain in my breast?
This Sense, that lay dormant before?
Lie still, busy flutt’rer and rest:
The Peace of my bosom restore:

Why trickles, in silence, the Tear?
This sighing, ah what does it mean?
This mixture of Hope and of Fear,
Where once all was mild and serene.

What wakes this new Pain in my breast? &c.

Some pleasingly anxious alarm
Now warms, and then freezes my heart:
Some soft, irresistible charm,
Alternate gives pleasure and Smart.

Mrs Crouch = Anna Maria Crouch (née Phillips) who was born in London 20 April 1763 and died aged 42 in Brighton on 2nd October 1805. She was an English soprano and actress who sang many roles – some leading roles were created for her – in London and also in Dublin. She also had an affair with the then Prince Of Wales. You can read more about her here.

Leonard Macnally (born in Dublin 1752 – d. Dublin 1820) was a playwright known as the person who wrote the words of ‘The Lass Of Richmond Hill’. His ‘Fashionable Levities’ was produced at Covent Garden in 1785. ‘What Wakes’ was extracted from the play, set to music and inserted in to the Drury Lane Theatre production of Shakespeare’s ‘Twelfth Night’.

The composer is not credited but Mrs Crouch was articled to composer Thomas Linley at Drury Lane Theatre London, for several years. Thomas Linley may well have composed ‘What Wakes’ as he was joint manager of oratorios at the theatre and wrote music for many plays.

You can listen to a (synthesised) audio version of the piece

Download a pdf score What Wakes This New Pain In My Breast Score.