(More to be added soon.)

Notes On The Stave – Lines And Spaces 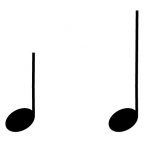 A Stave is a set of five lines on which notes are placed to indicate the pitch of the notes (how high they are):

The higher the note is placed on the stave, the higher it sounds.
Some instruments, for example the piano, use more than one stave together because of the range of notes playable: 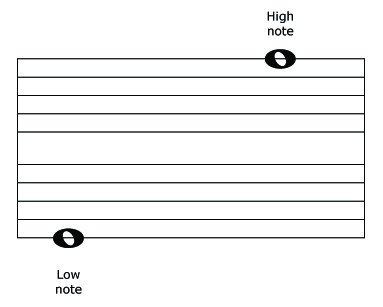 Notes On The Stave – Lines And Spaces

Notes are placed on the stave either in spaces (between adjacent lines):

or on the lines (with lines running through the middle like beads on strings):

Consecutive white notes on the piano are placed on alternate lines and spaces:

Note stems can go up, or down, from the note. Whether the stem goes up or down makes no difference to the note. These two notes sound identical:

The Treble Clef is placed at the beginning of each stave (set of five lines). It is used for middle and high notes. On the piano these are the notes in the middle and to the player’s right.

The treble clef is also known as a G Clef. This is because its ‘tail’ sits on the second line up, indicating that a note on this line (looking like a bead on a string) is called G.

Here are some treble clef notes with their letter names added:

The Bass Clef is placed at the beginning of each stave (set of five lines). It is used for middle and low notes. On the piano these are the notes in the middle and to the player’s left.
The bass clef is also known as an F Clef. This is because the two dots of the clef indicate that the note on the line between them (like a bead on a string) is called F.

Here are some bass clef notes with their letter names added:

Quaver (or eighth note).
Hold this note for half the length of a crotchet.
Quavers may be joined together,  for example:

Crotchet (or quarter note).
Hold this note for a count of 1.

Minim (or half note).
Hold this note for a count of 2, ie. for twice as long as a crotchet.

Dotted minim (or dotted half note).
Hold this note for a count of 3, ie. for three times as long as a crotchet.

(A dot immediately after a note increases the value of that note by one half.)

Semibreve (or whole note).
Hold this note for a count of 4.

Dotted Semibreve (or dotted whole note).
Hold this note for a count of 6.

These are both Breves (or double whole notes).
Hold this note for a count of 8
(Breves are rarely used.)

Rests are the silences between the notes when a hand or instrument doesn’t play.

Alternative crotchet rest. Count 1.
Rarely used but sometimes appears in choral music.
Not to be confused with the quaver rest – if the rest looks like a letter q it’s a quaver rest, if it’s the other way round, it’s a crotchet rest.

Minim rest. (Sitting on the line.) Equivalent to 2 crotchets.

Semibreve rest. (Hanging from the line.) Equivalent to 4 crotchets.

The Keyboard – the black and white keys which are pressed down by the player to make sounds.
The white Keys, like the notes on the stave, are named after the first seven letters of the alphabet A, B, C, D, E, F and G and go from left to right, repeating. After G, the next white note to the right is another A.

To find D, look for two black notes together (not in a group of 3), the white note inbetween is D.

Some keyboards and smaller pianos have fewer keys than shown here but the layout is the same.

(There will be later articles on black notes names.)

Music is divided up into bars, ie. groups of beats. If you think how a waltz goes – ONE two three, ONE two three – there is an emphasis on ONE. That first beat of the bar is stronger than the others. This can be likened to the word ‘EL-e-phant’ – the stress is on the first syllable. In music, there is a vertical line on the stave just before each strong beat known as a bar line (or measure line).
There is also a double bar line at the end of a section of music or at the end of a whole piece.